A photo essay describing the different sights of Croatia’s 2nd-largest city, Split, and the nearby island of Šolta.

To view properly, click the first photo, and then click through the photos as you read the short captions.

First stop on the first day in Split: Diocletian’s Palace. Built in the 4th century AD as both a retirement home for the Roman emperor Diocletian and a military garrison for the Roman empire, today it is home to many apartments, cafes, and storefronts.

Around the palace and the rest of the historic district in Split, it is easy to get a bit turned around in the many narrow alleys and passage ways.

That afternoon we completed a circuit around Marjan Peninsula, directly west of centre Split, and renowned for its dense pine forest, jogging and hiking trails, and is home to the Institute of Oceanography and Fisheries.

Day two we were joined by a group of Irish girls also staying in our hostel. We decided to board a ferry to one of the many nearby islands and ports of Croatia.

The particular ferry we chose went to the island of Šolta, to the port village of Rogač. Traveling my boat is by far my favourite way to travel, and I’ll admit I was disappointed the ride was barely an hour.

It was strange, though, that on the way out from Split there was not a single gust of wind to be felt on the stern.

Once we reached Rogač we headed up the steep hills to the village of Grohote.

It was a beautiful, small town. Perhaps its most fun quirk was discovering several houses had small rowboats on their roofs. There was not much else to see, so we decided to continue on to another coastal village: Nečujam.

The walk took the better part of the day and left us tired, sunburnt and sore, but it was still incredibly fun. After finally making the almost 7 kilometers to Nečujam, and stopping a while for lunch and a swim in the cold Adriatic, we began to try to make our way back to Rogač, as we were not sure when the last ferry went back to Split. We ended up having to stop and ask different locals at their houses for directions; the first man spoke enough Spanish for me to figure out he spoke Italian, and to grab my suddenly quite useful Italian-national friend to assist in getting directions back around the mountains. Our hope was that we would not have to go back the way we came, as it had taken nearly two hours. We managed to find an English-speaking man at the end of the first’s directions, who directed us to a road that he called “almost a road.” It ended up being a tremendously overgrown path up the mountain, following a low-lying stone wall that was probably hundreds of years old. We jokingly referred to it as “Goat Road #3,” and had good fun getting back to Rogač quickly enough to stop for drinks at a cafe while we waited on the ferry.

Having spent most of the day trying to stay hydrated, we neglected the two bottles of red we’d snagged at the market on our way out that morning. What better way to spend the ferry ride back than to finish the two between us? Needless to say, we got back feeling much physically better about the day.

The cloudless skies offered amazing, pastel views of the sunset. An interesting juxtaposition to the deep-contrasted, bold sunsets we were used to in Denmark.

Several companies of cruise ships make port in Split; my friend traveling with me described an Adriatic cruise his parents had done, that went back and forth between various Italian cities and the Balkan peninsula. Something new for my travel bucketlist.

The centre’s front walk was beautiful, and the soft sunset was even kinder to it. Our first night I hadn’t been able to tell if the worn stone walls were white or pink (for the record, they were white).

While I spent most of the trip commenting on the copious amounts of cats we encountered, I was thrilled to see a plethora of pugs.

This guy is a performer from Quebec, Canada. He was hilarious to watch, and fun to chat with after. It was entertaining to stumble across so many French Canadians while we were in Split.

Again, I loved the boardwalk.

The next morning began our Super Tourist day, and included shameless pictures of nearly anything that looked like a landmark.

Here we see a tourist family eating ice cream in their natural habitat.

An embassy or consulate, I don’t remember which. But it had the flags of different countries hanging outside, and the staggered palms made for interesting (albeit probably accidental) geometric figures.

Here you meet my buddy Dave, who made it his life mission on our trip to get into as many of my photos as possible.

No, really. It became his mission.

The sunlight barely touching the alleyways around dusk was one of my favourite things about the city.

And this, the peristyle of the palace, was possibly my absolute favourite place in Split. Our first night we’d gotten in around 8PM, and after dropping our things at the hostel across town, we grabbed some sandwich wraps and came here to sit and listen to a guitarist play and sing one of the best repertoires of songs I’ve heard from a street performer. His songs included “The Joker” and even a song from Monty Python’s “The Life of Brian.” We came back here on our last evening to sort of take everything in, and were treated to the hilariously indescribable escapades of a group of men clearly there for a bachelor party, and there banana-costumed Bachelor.

The preservation of the different parts around the peristyle was wonderful to see.

…and even the unexpected sphynx.

Once more into the breach, or photo, at least, for David. 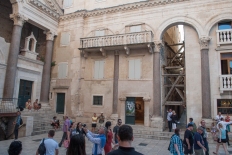 One thing I have not mentioned is an exciting bit of pop culture information: Croatia is home to several filming locations for the incredible HBO series, “Game of Thrones.” Parts of Split are used for much of the setting of Mereen, including the basements of the palace…

… which are used as the basements for Danaerys’s own palace, where she keeps her dragons. I won’t lie, that was really cool to see and experience.

Making our way back out of the depths of Mereen- er, Diocletian’s palace, we were able to experience more of the home-yness of Split. Tourist season had not quite kicked off, and the city was both peaceful and vibrant. 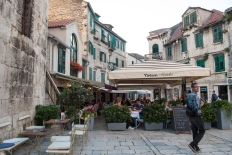 I hadn’t known what exactly to expect from Split, but the city certainly exceeded any expectations I might have had.